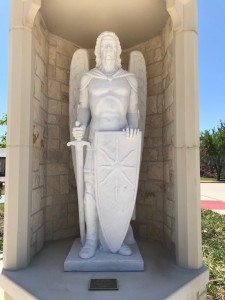 I thought this was a timely article for our consideration...

For years, one of my favorite online magazines Has been Crisis. In 2013  they offered an insightful article on Halloween by Sean Fitzpatrick entitled All Hallows Eve or Halloween? Like many, I have been all over the place on this matter. I respect the various ways in which Catholics and other Christians choose to approach it. However, I think it is helpful to consider the context.

The term Halloween is derived from All Hallows Eve, the Christian Vigil of the celebration of the Christian Feast of All Saints. The beautiful readings at Holy Mass point us toward the perfection of the Saints in heaven and encourage us to become saints in our own journey here on earth, through living the words of Jesus in the beatitudes.

Like many Catholics and other Christians I am aware that the contemporary celebration of Halloween, with its undue influence on goblins, ghosts and the demonic, reflects the waning influence of the Christian worldview in the West. However, it also presents an opportunity for Catholic Christians to do what we have always done, live like missionaries in our own culture. Particularly during this Year of Faith I suggest we consider how the Church has transformed cultures throughout her history- and then do the same.

The Church has always recognized that some cultural practices can be mixed, containing those aspects which elevate the human person and those which do not. Halloween falls in that category. However, I suggest that members of the Catholic Church are invited to transform cultural practices from within through a proper participation. That has been our missionary model for over two millennia. Many of the dates on the calendar which were Christianized and now host Christian Holy-Days were originally utilized for Pre-Christian (Pagan) celebrations. This process reflects the wisdom of the Church and her faith based missionary approach. She baptized them, recognizing the seeds of what was good and true within them.

By immersing them in the beauty of the proclamation of Jesus Christ, the Word Incarnate - who is the fullness of truth and the source of all goodness - she turns them into vehicles for transforming culture by infusing them with the values of the Kingdom which Jesus inaugurated. The Church is the Body of Christ. She is meant to become the home of the whole human race. As the early fathers were fond of proclaiming, the Church is the world reconciled - the world in the process of transfiguration. We who live our lives now in the Church do so for the sake of the world.

We should not be afraid of human culture. We are called to continue the redemptive mission of our Lord by transforming it from within as leaven in a loaf. Even the emphasis on the dead which often accompanies Halloween offers an opportunity to address this great existential issue. Whereas many secularists and contemporary pagans fear death, we do not. The early Christians always honored the dead and had a special devotion and affection for the martyrs. We have wonderful accounts like the Martyrdom of Polycarp from the middle of the second century which set forth the practices:

“Accordingly, we afterwards took up his bones, more precious than the most exquisite jewels, and more pure than gold, and deposited them in a fitting place, so that when being gathered together, as opportunity is allowed us, with joy and rejoicing, the Lord shall grant us to celebrate the anniversary of his martyrdom, both in memory of those who have already finished their course, and for the exercising and preparation of those yet to walk in their steps.”

The Liturgy was often celebrated over the bones of the holy ones, the martyrs, who gave their lives in love for Love Himself; Jesus Christ the Savior. This is one of the origins of our practice of embedding relics in the altar to this day. Christians do not fear death. We view it with the eyes of faith as a change of habitation. The dates of commemorating those who witnessed to the faith by their heroic lives and deaths varied as local communities honored local saints and martyrs. Over time, those Feast days became more universally accepted as the rhythm of the Church Year became more uniform.

The first account we have of honoring all the saints is from the Deacon, St Ephrem the Syrian (d. AD 373). The great Bishop of Constantinople, St. John Chrysostom (d. AD 407), set aside the first Sunday after Pentecost for this commemoration. The Church of the East still celebrates the Feast on that day. In the Western Church the date may have originally been on that date but was moved to May 13th. There is some evidence that the move to November 1 came with Pope Gregory III (d. AD 741), and was likely first observed on November 1st in Germany.

The Feast of All saints is our family Feast Day - when we honor all those who have died, marked with the sign of faith, and gone on before us to be with the Lord. They now beckon all of us into the fullness of the communion of love. The vigil of the Feast (the eve) came, in the English speaking world, to be known as All Hallows Eve or Halloween.

While some consider the current approach to Halloween to be mostly pagan in its practices, it is the eve of this great Christian Feast of All Saints. It is time to restore customs which communicate the Christian confidence in our triumph over death in Christ and our bold rejection of the claim that evil has any more power over us.

In a special way on All Saints Day we commemorate all who have been honored by canonization, the process wherein the Church has acknowledged their extraordinary lives of holiness and holds them up as models and intercessors. This wonderful celebration is grounded in the most ancient of Church teaching concerning the Communion of Saints.

The Church proclaims that death does not separate us any longer because it was defeated by Jesus Christ. (Romans 8:28) We affirm and celebrate our eternal communion in Him - and with one another - through the Holy Spirit. We honor all of our brothers and sisters, known and unknown, who are a part of that great cloud of witnesses to which the author of the Letter to the Hebrews attests. (Heb. 12:1).

Just as we pray for one another, so those who have gone on before us pray for us and are joined to us forever in that communion of love. This ancient and firm belief is attested to in the earliest writings of the Christian tradition.

For example, St. Cyril of Jerusalem (AD 350) wrote: "We mention those who have fallen asleep: first the patriarchs, prophets, apostles, and martyrs, that through their prayers and supplications God would receive our petition... (Catechetical Lecture 23:9).

The Catechism of the Catholic Church explains this communion in these words: "Being more closely united to Christ, those who dwell in heaven fix the whole Church more firmly in holiness...They do not cease to intercede with the Father for us...So by their fraternal concern is our weakness greatly helped....as Christian communion among our fellow pilgrims brings us closer to Christ, so our communion with the saints joins us to Christ, from whom as from its fountain and head issues all grace, and the life of the People of God itself: We worship Christ as God's Son; we love the martyrs as the Lord's disciples and imitators, and rightly so because of their matchless devotion towards their king and master. May we also be their companions and fellow disciples (CCC # 956, # 957)

So, on the evening when kids throughout our neighborhood and adjoining neighborhoods walk from door to door, collecting candy, we will leave our light on. I know that some Catholics and other Christians will make a different decision. I respect that decision as well. Over the years that my wife and I were raising our children, and our grandchildren, we have tried both approaches. As you can tell, one won the day, at least for me.

As for the growing pagan practices around us, we need to continually look through the lens of living faith. We are a missionary Church. That is why I use the term Pre-Christian to describe the state of the West - not Post Christian. This is a new missionary age and there is a lot of work to be done. I say, let's embrace what is good in our culture - and transform what is not. Halloween is just one more invitation to engage in Christian missionary activity.

Bishop Joseph E. Strickland was named the fourth bishop of Tyler in September of 2012 by Pope Benedict XVI. Prior to being named bishop, he served a number of roles in the diocese, including vicar general, judicial vicar, and pastor of the Cathedral parish. He was ordained to the priesthood in 1985.
Prev:  Awake from Your Slumber