Bishop's Blog / Awake from Your Slumber 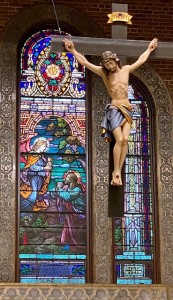 to America during the American Bicentennial,

made the following comments:

"We are now standing in the face of the

greatest historical confrontation humanity has gone through. I do not think that

realize this fully. We are now facing the final confrontation between the Church

and the anti-Church, of the Gospel versus the anti-Gospel. This confrontation lies

within the plans of divine Providence; it is a trial which the whole Church… must take up. It is a trial of not only… the Church,but, in a sense, a test of 2,000 years of culture and Christian civilization with all

of its consequences for human dignity, individual rights, human rights, and the rights of nations."

We must awaken to the reality that these prophetic words of Pope Saint John Paul II spoken in 1976 are unfolding before our eyes. We must proclaim Jesus Christ more vigorously than ever before.

Bishop Joseph E. Strickland was named the fourth bishop of Tyler in September of 2012 by Pope Benedict XVI. Prior to being named bishop, he served a number of roles in the diocese, including vicar general, judicial vicar, and pastor of the Cathedral parish. He was ordained to the priesthood in 1985.
Prev:  July 26, Saints Joachim and Anne
Next: Thoughts on Halloween